Here is a preview of the outstanding exhibitions on view this spring in New York City: 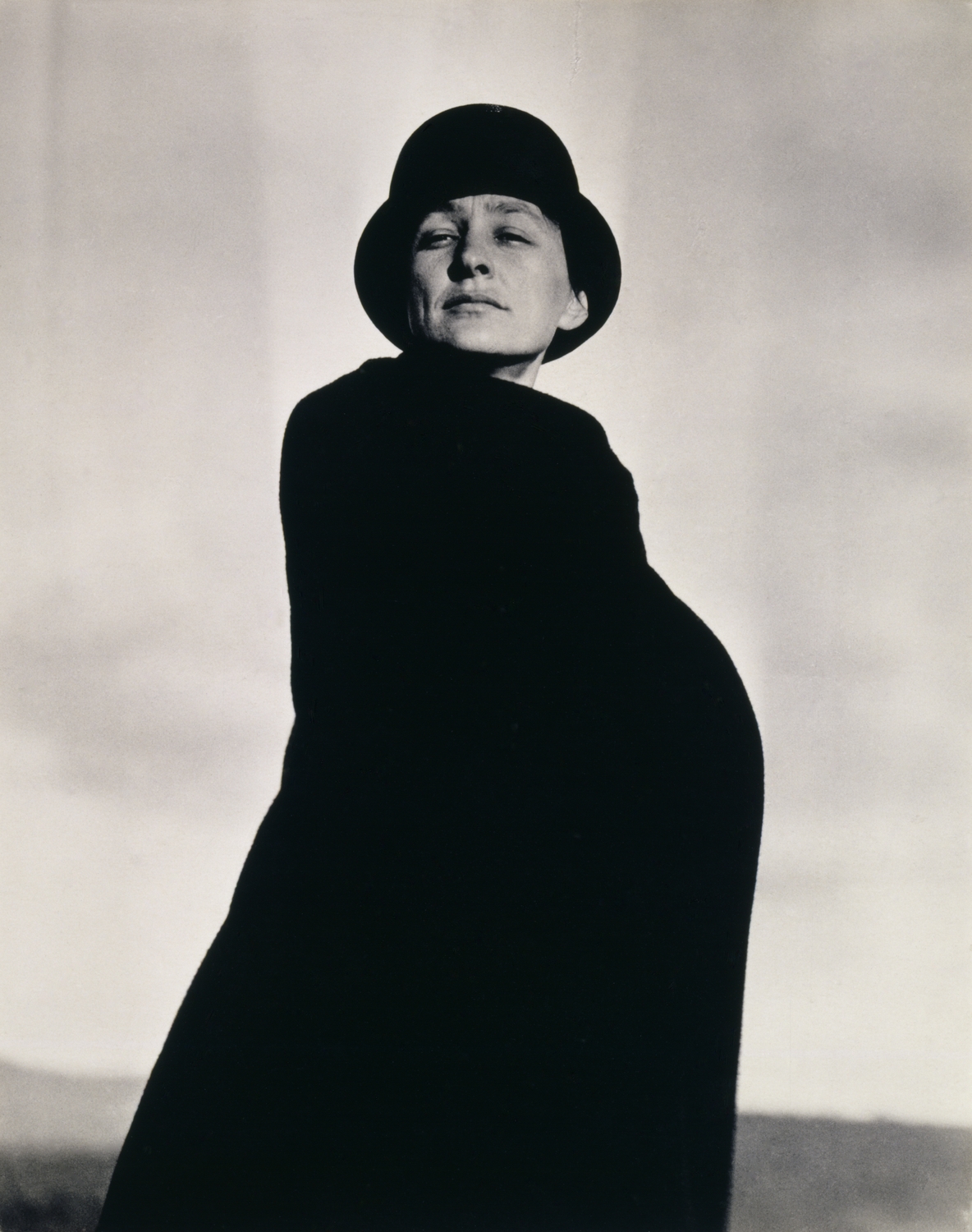 Georgia O’Keeffe: Living Modern takes a new look at how the renowned modernist artist proclaimed her progressive, independent lifestyle through a self-crafted public persona—including her clothing and the way she posed for the camera. The exhibition expands our understanding of O’Keeffe by focusing on her wardrobe, shown for the first time alongside key paintings and photographs. It confirms and explores her determination to be in charge of how the world understood her identity and artistic values.

This exhibition explores Marsden Hartley’s complex and visually arresting relationship with his native state—from the lush Post-Impressionist inland landscapes with which he launched his career, to the 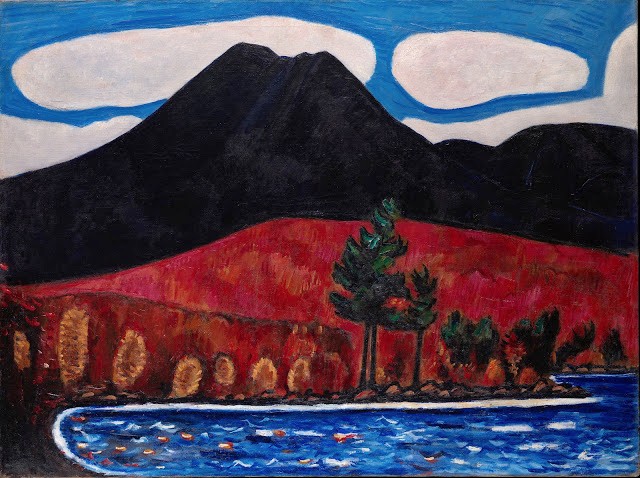 later roughly rendered paintings of Maine’s rugged coastal terrain. The exhibition illuminates Maine as a critical factor in understanding Hartley’s high place in American art history. Maine served as an essential slate upon which he pursued new ideas and theories.

In keeping with The Met Breuer’s mission to present modern art in the context of the history of art, this exhibition includes select works from The Met collection by other artists who shaped Hartley’s vision, including French modernist Paul Cézanne, Japanese printmakers Utagawa Hiroshige and Katsushika Hokusai, and American painters Winslow Homer and Albert Pinkham Ryder.

The 2017 Whitney Biennial, the seventy-eighth installment of the longest-running survey of American art, arrives at a time rife with racial tensions, economic inequities, and polarizing politics. Throughout the exhibition, artists challenge us to consider how these realities affect our senses of self and community. The Biennial features sixty-three individuals and collectives whose work takes a wide variety of forms, from painting and installation to activism and video-game design.

Taking as its focus one of The Met’s most captivating masterpieces, this thematic exhibition affords a unique context for appreciating the heritage and allure of Circus Sideshow (Parade de cirque), painted in 1887–88, by Georges Seurat. 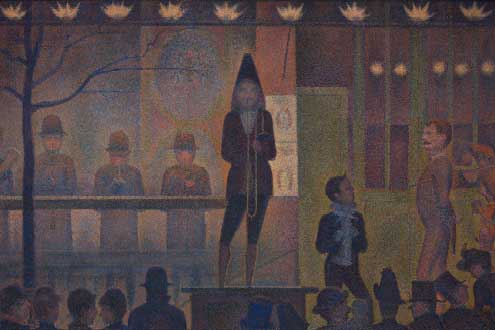 Anchored by a remarkable group of related works by Seurat, the presentation explores the fascination the sideshow subject held for other artists in the 19th century, ranging from the great caricaturist Honoré Daumier to the young Pablo Picasso. This rich visual narrative unfolds in a provocative display of more than 100 paintings, drawings, prints, period posters, and illustrated journals, supplemented by musical instruments and an array of documentary material intended to give a vivid sense of the seasonal fairs and traveling circuses of the day. Among the highlights is Fernand Pelez’s epic Grimaces and Misery—The Saltimbanques, of exactly the same date as Seurat’s magisterial work and, with its life-size performers aligned in formation across a 20-foot stage, a match for his ambition. 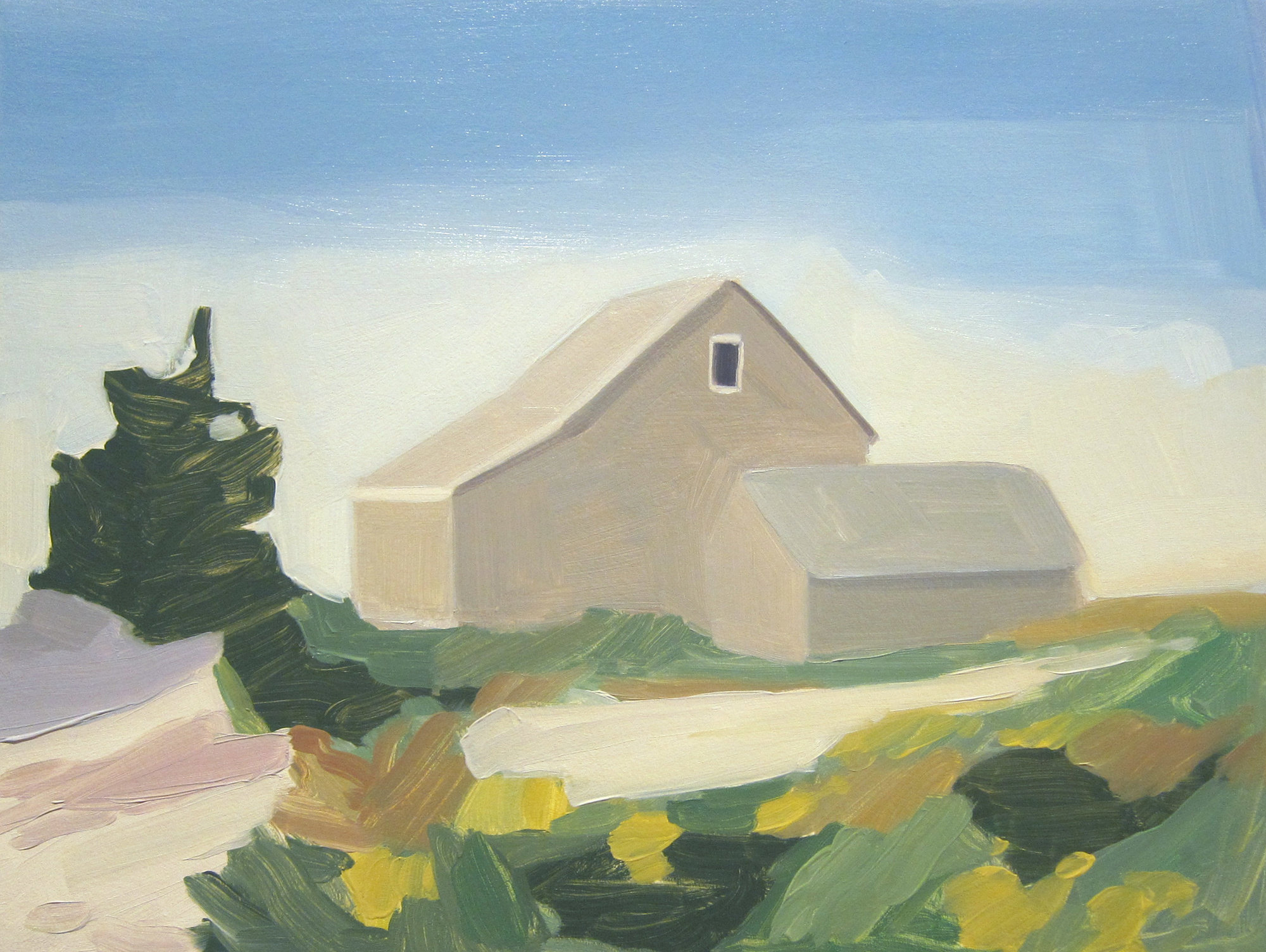 Often lacking doors or windows, her houses may seem locked up, or disquietingly open and vulnerable to the elements. Her lush gardens and yards can be obstructed by fences, and paths lead the viewer astray; infinite vistas over the ocean are stacked and collapsed into shallow compositions. From the outset of her career, Gallace has deployed a range of abstract compositional tools to frustrate the romantic enticements of her subject matter, giving rise to a quietly remarkable and contemporary body of work. 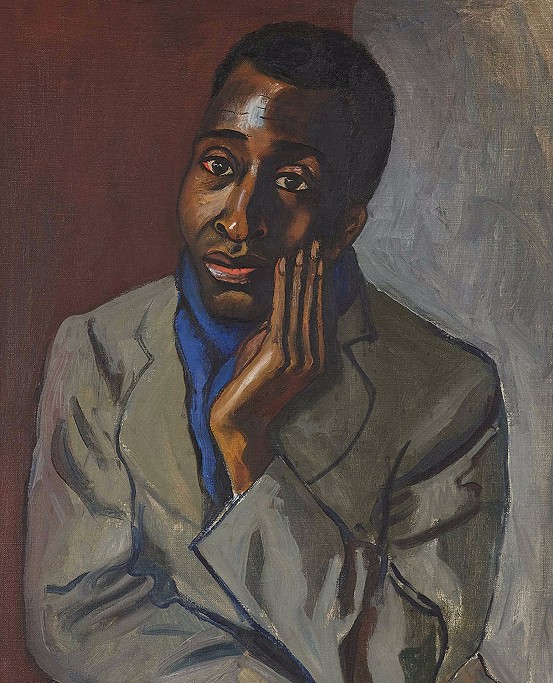 Respected writer and critic Hilton Als curates paintings and drawings Alice Neel (1900-1984) made during the five decades she spent living in Upper Manhattan, first in Spanish Harlem and later the Upper West Side.

One of the foremost American figurative painters of the twentieth century, Neel is known for her portraits of family, friends, neighbors, and locals as well as writers, poets, and other cultural and political figures.

This exhibition highlights the innate diversity of Neel’s approach. As Als notes, Neel “was attracted to a world of difference and painted that. Still, her work was not marred by ideological concerns; what fascinated her was the breadth of humanity that she encountered in her studio, on canvas…Alice Neel, Uptown, the first comprehensive look at Neel’s portraits of people of color, is an attempt to honor not only what Neel saw, but the generosity behind her seeing.” 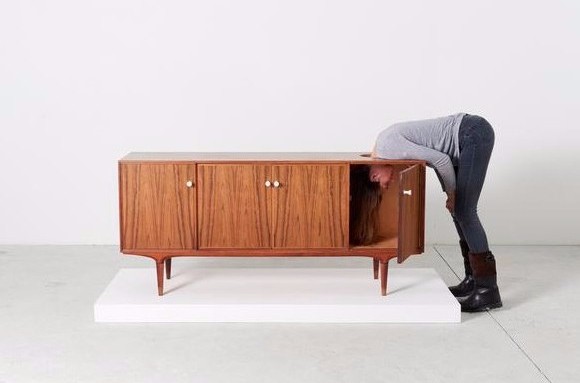 This exhibition consists of new “One Minute Sculptures” by Erwin Wurm. This year marks the 20th anniversary of these audience-activated sculptures that have influenced a generation of artists by redefining what a sculpture is and how the public engages with the medium.

The basic premise of a One Minute Sculpture remains uniform. For each work, using a drawing or specific text, Wurm directs participants to pose with an object, which have ranged from cleaning products and sneakers to furniture and fruit. The viewer enacts the proposed sculpture on a low plinth, manipulating their body and the predetermined prop in a pose held for a short time. Wurm reiterates that the success of these ephemeral pieces is determined by the exactness with which the directions are executed, stating, “The One Minute Sculptures only come into existence if the public follows precisely the instructions of the artist and free will has a low priority.”

The First Green will debut work created over the last year by Brazilian artist Thiago Rocha Pitta, featuring more than 20 frescos, a series of watercolors, and a video. Rocha Pitta will also create an installation on site at the gallery with a livin 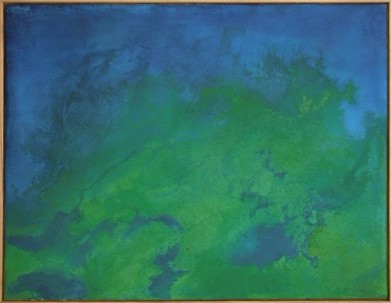 g bed of moss and a concrete tent-like structure. The exhibition marks a new chapter in his meticulous investigations of the natural environment, as he delves deeper into the origins and evolution of the earth.

Rocha Pitta’s diverse practice is connected to a deep fascination with the subtle transformations of the world around him—the slow erosion and alteration of desert terrain, the descent of fog, and the fluctuations of underwater formations. His work captures the vibrancy of a living planet by training the viewer’s eye on slow changes of materials, physical progressions of miniscule segments of land, and sudden shifts in weather. While figures are rarely depicted in his work, humanity’s presence and relationship to these changes is powerfully felt.

This new body of work by Kevin Francis Gray focuses on his commitment to marble and the exploration of its materiality, presenting a clear departure from his earlier veiled figures and neoclassically inspired ballerinas. 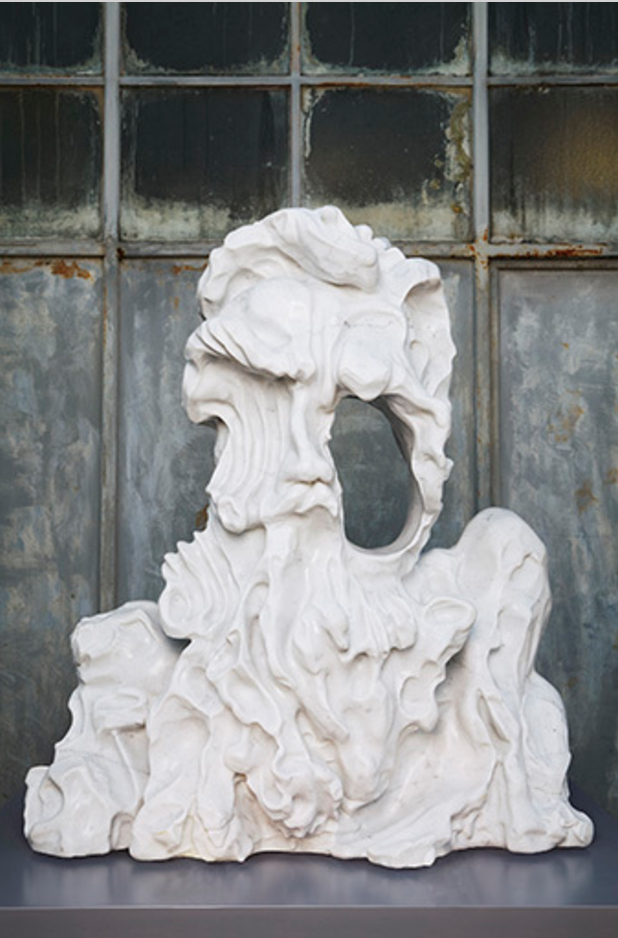 Originally from Northern Ireland, Gray’s personal background and artistic development inform the new works exhibited. The jagged, asymmetrical physicality of the works references de Kooning’s Clamdigger; the smooth, circular shapes echo Hepworth’s oval sculptures; and the trope of the reclining nude is reminiscent of Matisse’s iconic nudes. Moving beyond this historic threshold, Gray’s exhibition showcases his drive to further make contemporary the traditional material of marble. The works boldly recall the first steps of Gray’s process, which begins in clay-work: the marks of the artist’s hands, fingers and tools are visible and palpable, giving the illusion that the stone is as malleable as the initial clay sculpting.

In his investigations of form, perception, and subjectivity, Therrien isolates elements and objects from domestic or daily life, detaching them from their known functions. Time and again, his work demonstrates the transformative power of scale and viewpoint, from massive tables and chairs to towering stacks of p 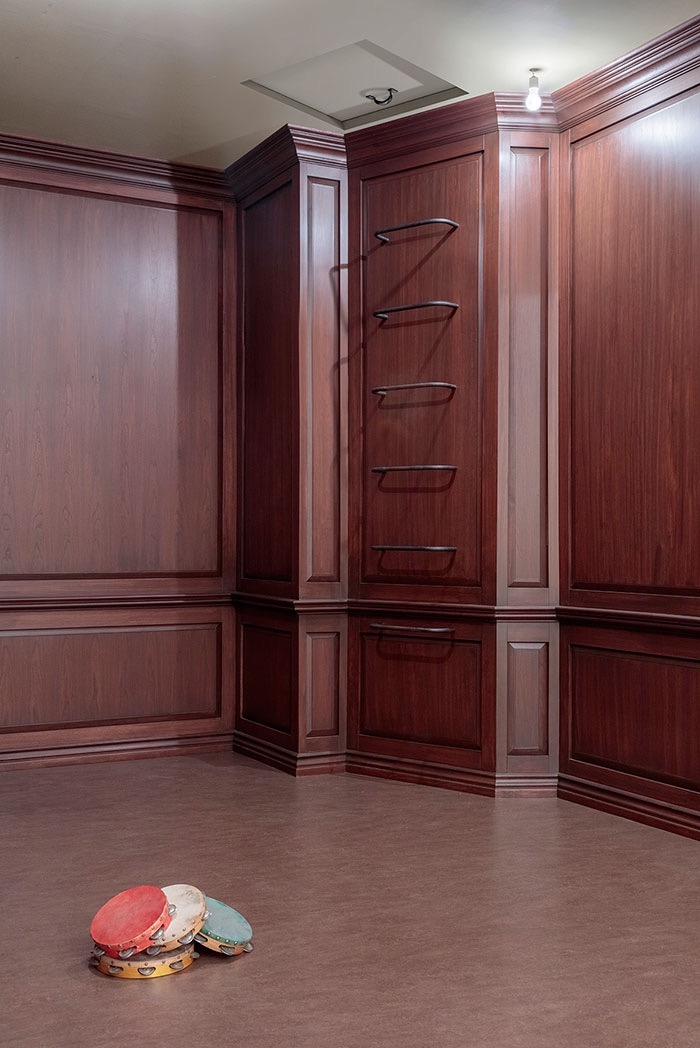 lates. In this exhibition, there are three free-standing rooms.

Through shifts in perspective and scale, Therrien renders ordinary experience uncanny and impedes the viewer’s ability to engage with space in any comfortable way. Each room transports the viewer out of the gallery and into a new narrative situation, prompting connections between material details and their subconscious associations. By making use of everyday things that are often overlooked, Therrien situates the viewer in familiar territory, then allows the objects to demand reassessment as instruments of subjectivity and of consciousness itself. 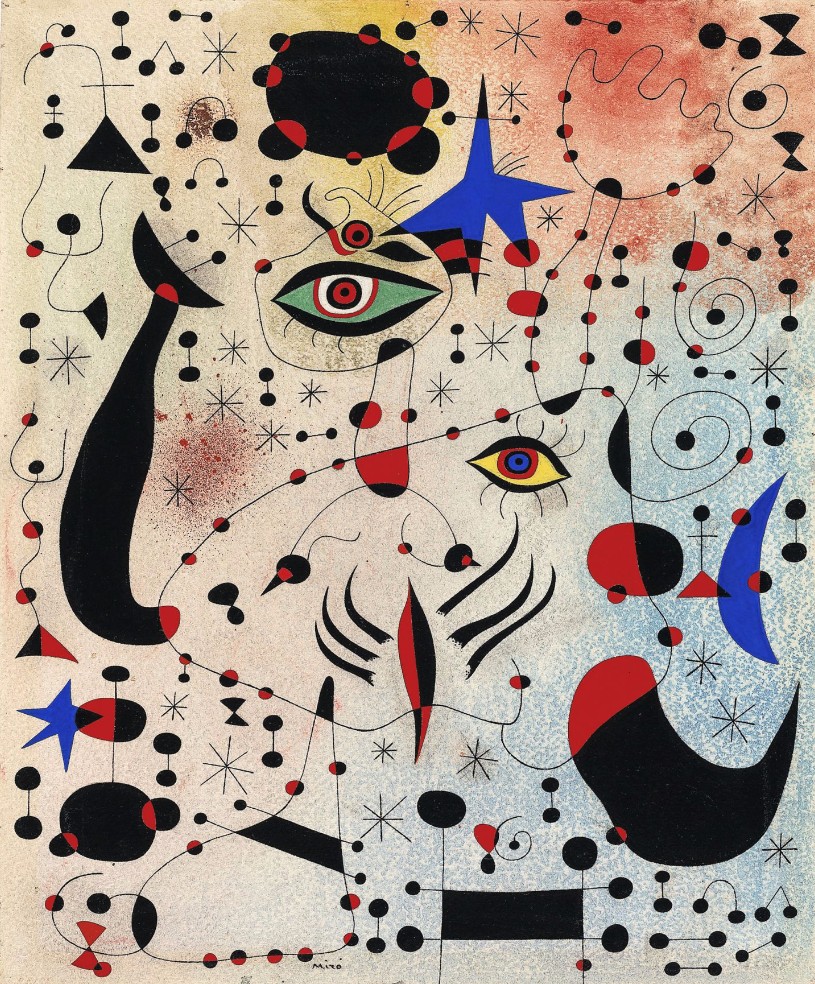 The distinct yet complementary presentations illuminate the startling affinities between the two artists, who at the time the series were created, were separated by the Atlantic during World War II and unable to communicate. Presenting approximately 60 sculptures, paintings and works on paper in dialogue with one another, these shows highlight the varied formal, social and political concerns that informed the significant series—neither of which were actually named Constellations by the artists themselves. 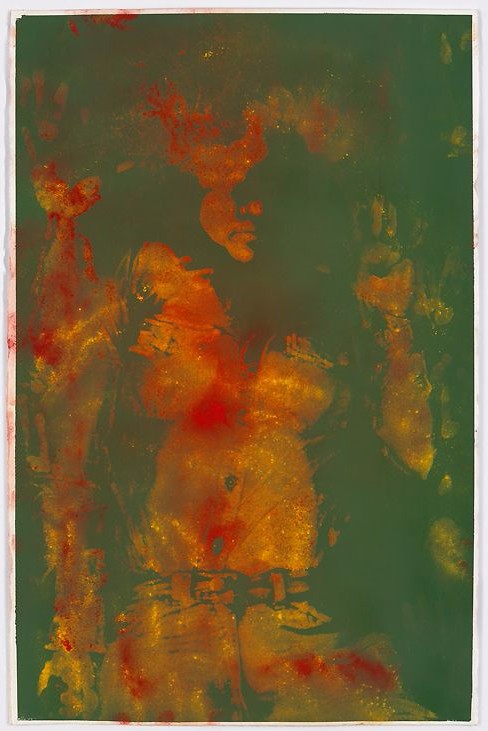 Ferris began the body print series during a residency in 2013. Contrary to the spray-painted abstract canvases for which she is known, the body prints offer an avenue for Ferris to inject herself physically into her work, both as a form of self-portraiture and as an alternate means of mark-making. The artist coats her body, nude or clothed, with oil and presses herself against paper on the floor of her studio. She then covers the impression with powdered pigment. The result is a photographic yet fragmented impression, recalling an X-ray or Xerox copy.

With these new works, Ferris continues to explore painting as a personal index and the literal relationship between the artist and his or her work. Ferris highlights the physicality of the process, subtly shifting the position of her body to create impressions that range in tone from static to fluid, defensive to aggressive, and masculine to feminine. The viewer senses the artist’s hand and, in turn, the objecthood of the prints.