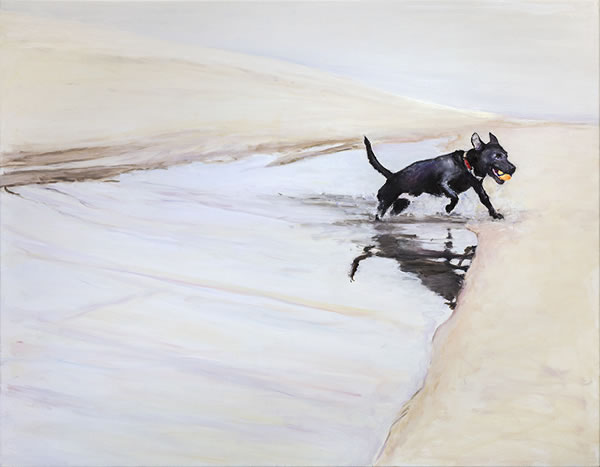 Summer Diaries explores Sullivan’s ongoing process of capturing moments from his life and bringing disparate scenes together to create a lively space of pictorial and narrative conversation. In this exhibition of oil paintings and pastel drawings, 8 new works are augmented by pieces from 2011 and 1992, although one new painting revisits a morning at the Regency Hotel in 1975. Sullivan continues to expand and pore back over what one observer has called his “archive of loved ones,” a collection of analog and digital photographs begun in late ‘60s, from which he selects individual images to serve as templates for paintings, pastels, watercolors and ink drawings.

Also on view at Ille Arts is Oceans Eleven.  A group show curated by Billy Sullivan, featuring new works by eleven artists whom he has been following over the past several years. The show includes a wide variety of mediums, formats, and ways of working, including drawing, painting, photography, and sculpture. And the artists themselves represent a span of generations, from undiscovered to emerging artists, to veteran East Enders. Each of these artists has a kind of personal obsession or dedication that plays out in their work over many years. Each work tells a story of some kind, but also retains an air of mystery. 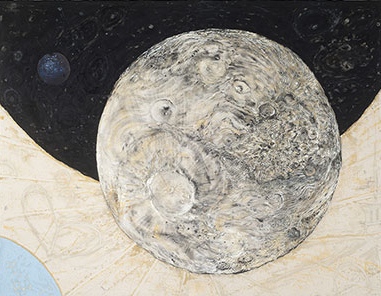 Bryan Hunt’s exhibition Flyby, presents new works focused on the expansive reach of space exploration, the study of astronomy and the structure of celestial bodies. In an installation that includes large and small paintings, wall reliefs and ceramic sculptures, Hunt’s lifelong passion for galactic inquiry is transformed into a visionary cosmology.
Harper’s Books, East Hampton 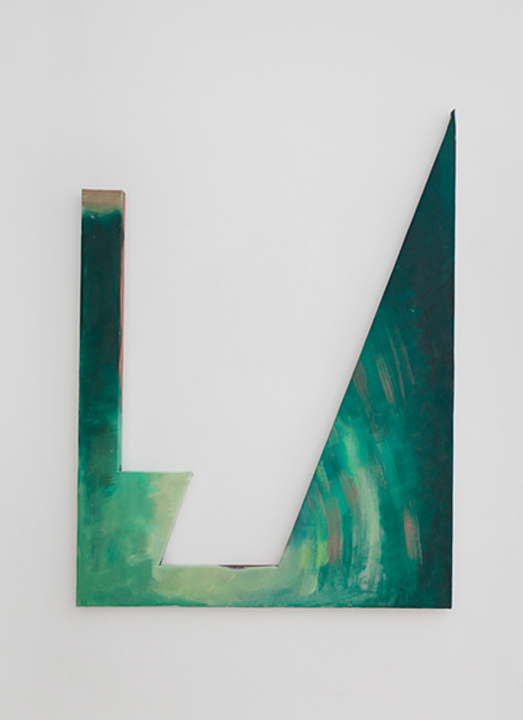 Early Words is the first installation comprised entirely of Graham Collins’ shaped paintings. Striking a balance between hands-on, intuitive gesture, and hyper-conceptualized methods of production, cast aside canvases painted by a multitude of unknown collaborators are reworked and reimagined into a lexicon of contemporary art. Obsessively focusing on the peripheral and often unseen aspects of paintings and sculpture, these works take a holistic approach towards facture–often, every physical component of a work is articulated in a kind of visual single-effect theory.

Ring of Chorus,  is the gallery’s first solo exhibition with Ned Colclough. Coclough fabricates, gleans and arranges work-a-day materials to challenge the plasticity of perception.  In his hands, glass, fabric, metal, and stone is meticulously altered and idiosyncratically affected. His accumulations manifest as wall reliefs, and sculptures, that serve as artifacts of the symbiotic proces which they undergo within the studio. 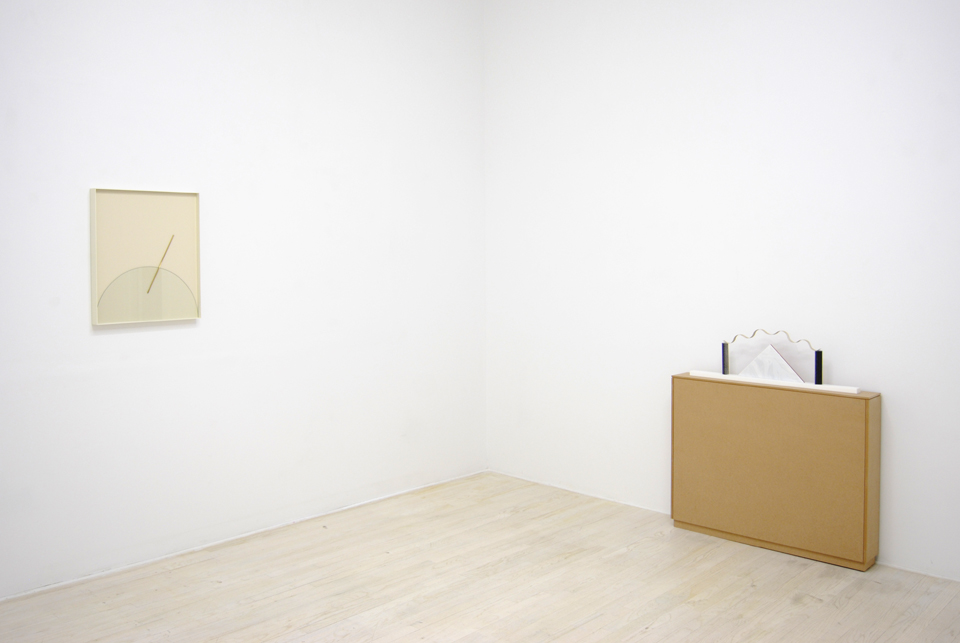 Oddly confrontational in their strange, almost sci-fi appearance, the chosen materials’ decorative, and applied arts origins render an easier ambience upon prolonged viewing. This atmopheric waiting is central to the role that the artist plays at work, with the objects under scrutiny. Never forceful with his spoils, patience and looking lead to associative take offs, and elegant displays of architectural folly.

Roy Lichtenstein: Between Sea and Sky 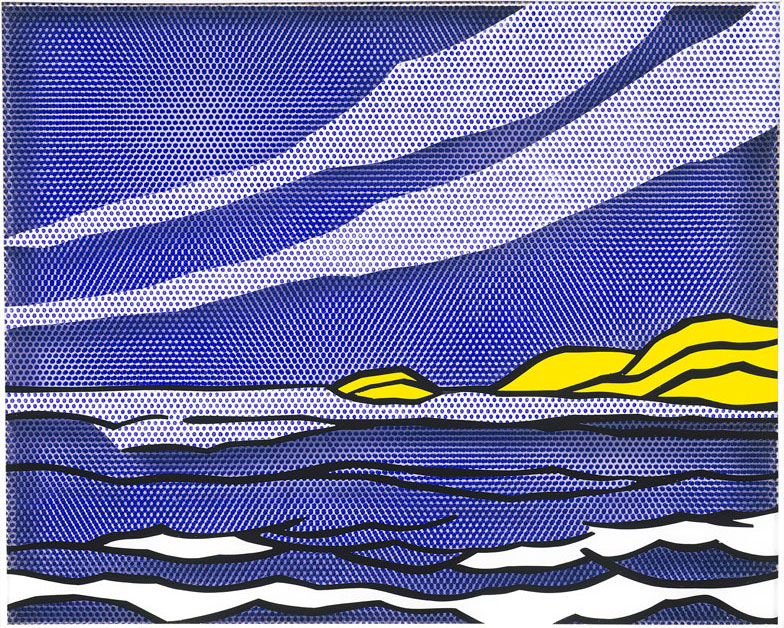 In 1964, inspired by both the long history of art and by imagery he found on contemporary printed postcards, Roy Lichtenstein began to explore the genre of land and seascapes, using paint, plastic, enamel, drawings, collage, print, and even film to realize his various works. Seascapes were an essential part of the artist’s lifelong exploration of psychological optics, light and his keen observations on the nature of field and ground. They were a genre he would revisit throughout his career in various media and guises. Comprised of over 30 works from private lenders and the Roy Lichtenstein Foundation, the exhibition will include works from the 1960s-1990s. A collaboration between Guild Hall and the Roy Lichtenstein Foundation, Roy Lichtenstein: Between Sea and Sky celebrates the artist’s abiding relationship with the East End of New York and all that it inspired. 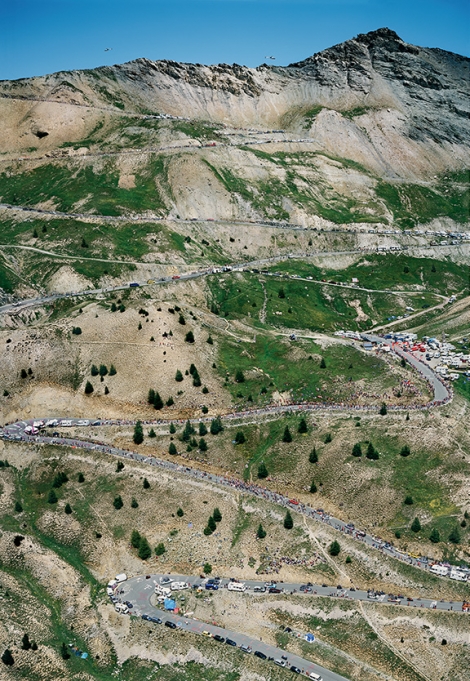 German visual artist Andreas Gursky is renowned for his monumentally scaled photographs—grand urban and natural landscape vistas and large format architecture—created from a dispassionate, omniscient point of view. Highly detailed, Gursky’s images are at once dead-pan observational and transcendent. He rigorously composes his expansive views to envelope viewers with dizzying scale, detail, and color—effects he often heightens through digital manipulation of the image. Gursky has been instrumental in defining contemporary German art in the 1990s. The exhibition focuses on some of his most enigmatic images of landscape, water, and architectural detail.

Touch Thoughts is an exhibition of new works by Darius Yektai, marking the artist’s fourth solo show with the gallery. Each touch, a brushstroke of thick oil paint or a groove carved into wood, is the physical manifestation of a thought. The thought can be deeply premeditated or spontaneous, yet it comes from the same source—the artist’s mind. In Yektai’s creative process, touch is revealed in various forms, exposing different moments, moods and thoughts. The touch, in varying levels of forcefulness, allows for expression of the internal—made up of the multidimensional layers of consciousness. The finished artwork claims the next step—relaying these thoughts to the viewer and completing the circuit.